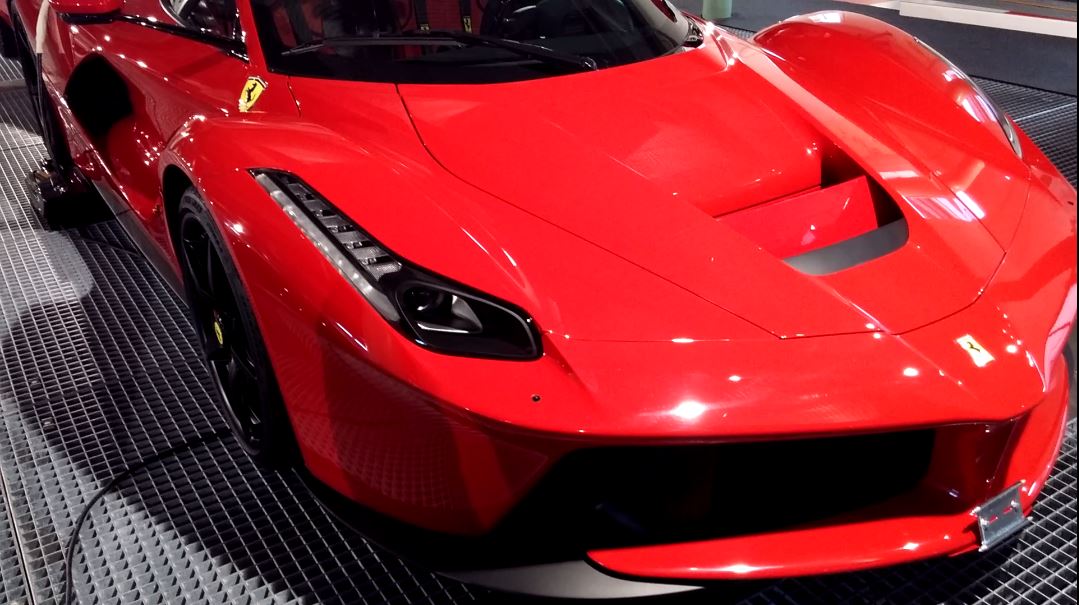 Let’s start the Autobau tour with the Ferrari LaFerrari. Many have found it odd to repeat the brand name in the model name and wondered why they didn’t actually name after its project name, the F150. Well, they couldn’t officially name it F150 because Ford has the name rights for that – ever heard of the F150 Pickup truck?! 😉 Anyway, it’s the latest hypercar to come out of Maranello’s factory and replaces the legendary Enzo.

This exact one is all red as you can see, as opposed to some press cars that have a black roof – classic Ferrari. There are massive air intakes in the front and gills in the hood to give it better downforce. In fact the whole car looks like it’s been shaped by the wind – which it certainly has – in the wind tunnel. The rear view mirrors are pretty far up and away from the side windows, but then the windows are more in the core of the car, instead of being part of the lateral edge.

The engine is a mid-rear mounted Ferrari V12 with a 6.3 litre displacement producing 800 hp and 700 Nm of torque. Combined with the 163 hp electric motor it reaches a maximum power of 963 hp! Thanks to the kinetic energy recovery system (KERS) it manages to store electric energy under braking and storing it in batteries so that it can be used for acceleration. It is the first hybrid Ferrari. You get extra torque while boosting out of a corner and have the power of the engine as it’s revved up.

All that make the LaFerrari go like hell! But as Pirelli’s famous slogan stipulates: “power is nothing without control”, the LaFerrari too needs an adaptive rear diffusor that goes up when you hit the carbon brakes before cornering and goes down again upon acceleration in order to constantly have the best grip on the road. I haven’t even mentioned the automatic rear spoiler to further increase the handling performance. In classic Ferrari style, the trunk is made of glass so you can admire the potent and beautiful V12 engine. If you take a close look at the upper right side, you can see a typical 21st century technology item: a charge plug for the hybrid system.

Inside, well, being part of a private collection it is locked, so there is no way they’d let me in. But I can say this: There are no conventional seats. The driver and the passenger sit directly on the floor itself. In other words, Ferrari just stuck a few pads onto the carbon fiber monocoque and named the result “seats”. Since they cannot be adjusted, the pedal box and steering wheel positions can in order to have an optimal driving position. Most of the inside is made of carbon and the steering wheel is square, which somehow makes it special and more Formula One-like.

Price: 1.69 million $ and you have to have owned several other Ferraris before just to be allowed to purchase one. Ferrari made 499 of them. Why did they stop at 499? As Enzo Ferrari used to say: “Always sell one car less than the market demands and maintain the value”. And that’s all I have to say about that.