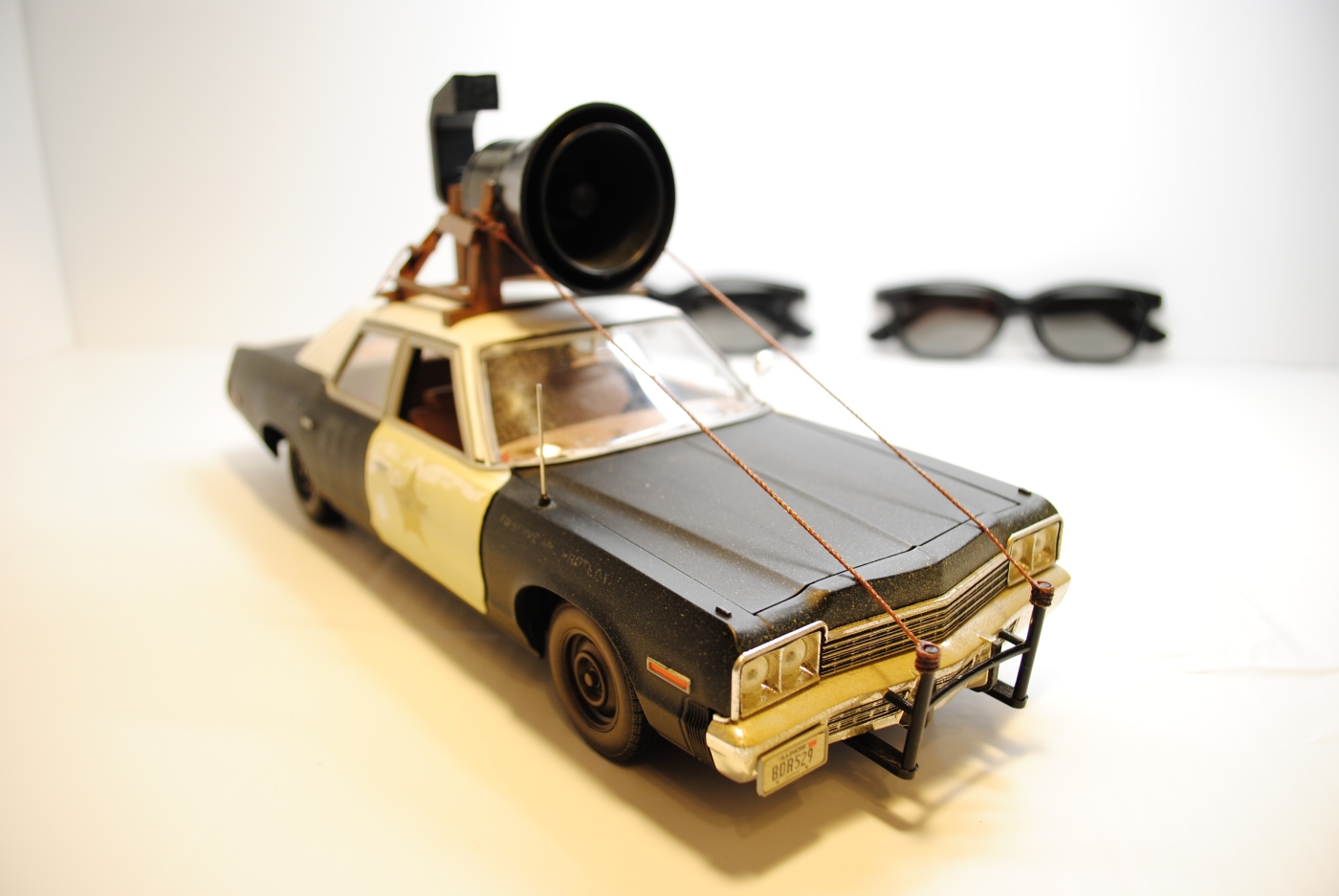 History of the car

This metal example comes with the the classic, slightly tarnished Mount Prospect, Illinois police livery painting. It has the the black push-bar, standard for a US police car, the correct license plate “Illinois BDR 529” and the steel wheels without hubcabs. They did a nice job installing the left rear view mirror only, as well the police searchlight on the left A-pillar. However, there is no handle on the inside to operate it, but that would probably have been more difficult to make the searchlight stay at a fixed position.

The original police letterings and symbols, such as the “to serve and to protect” are visible on both front fenders and so is the star on either front doors, as well as the “P1” on the back doors – just as in the movie. RC2 did well adding all of these elements while still making the entire paint job look old. The big thing that caught my attention was the spray painted dirt cover all over the car – just like a car looks like after “106 miles to Chicago”. Like the front license plate, the rear one is obviously accurate as well, but in a very special way; although it has four holes to put screws in, it’s only attached by the lower two, which is equivalent to the movie version. Furthermore, RC2 deleted the middle “D” of the Dodge lettering on the back. I’m glad they did that despite the fact that it is a Dodge license product and that the car brand might have wanted its name to be branded properly on its merchandising article.

The windshield whipers are very subtle and hide just behind the hood and don’t stick out as much as the ones of the 1969 Dodge Charger R/T “General Lee” I reviewed previously.

The running lights, doors handle and door locks clearly stick out and were not just painted on. They appear to be a part of the respective body panels and are not glued on them, which gives the entire car an even more solid appearance. They even put on the radio antenna. It was on the original car as well. However, that one was all twisted, whereas the one on the model is perfectly straight.

Elwood carried his handbag with him throughout the entire movie. This one is made out of slightly soft plastic and is attached to the floor of the trunk.

I suppose the only way of disconnecting it would be to disassemble the car and to unbolt it from underneath. And then, looking at the dashboard you can’t miss all of the garbage imitations they replicated – cigarettes, pack of cigarettes, crushed coke cans and so on. The attention to details just shows how much respect RC2 had with regards to the Blues Brothers franchise.

With all that praise given to this model car, there are still a few things that are not quite accurate to the actual movie car. First of all, the two bumpers. On the model, you’ll find two vertical bars on either bumper. Which are correct, when you look at it from a factory point of view. On the Bluesmobile however, for whatever reason, they were removed. If you look closely at the bumpers in the movie, you can spot the respective holes where those bars are supposed to be mounted.

By now, any true Blues Brothers fan will ask himself where they iconic loudspeaker is they carried on the roof of the car. Obviously, this model came complete with that loudspeaker on a wood imitation frame and four robes to attach it to the car.

Obviously, the loudspeaker and the frame are both made of plastic, but once again they put on a very nice paint job: It could have been painted in a slightly lighter grey to match better to the actual one of the movie, but it’s very well made, nevertheless. And so is the frame holding the loudspeaker. I especially like the slightly elastic ropes that attach the frame to the car.

At first glance, I’m happy to announce that the dirt cover story continues in here. As mentioned in the introduction, this car is equipped with the 440 cui V8 and is producing a total of 280 hp. It’s just beautiful to see how much attention they’ve paid to details – every part of it is clearly visible and painted accordingly: air filter, the blue valve covers, power steering, alternator, and what appears to be the cooling fluid container – even the clamps of the battery plugs are visible.

Moreover, the solid metal hood has been given the actual shape on the interior as well and it closes nicely and fits perfectly. I assume I can quote Elwood Blues to sum up the mechanical part of this car: “It’s got a cop motor, a 440-cubic-inch plant. It’s got cop tires, cop suspension, cop shocks. It’s a model made before catalytic converters so it’ll run good on regular gas”.

I’m pleased to note that the same attention to details has been carried on underneath the car. First off, the entire undercarriage is covered with the same coat of dirt as the rest of the car. The different elements of the engine, oilpan, steering, exhaust system and suspensions have been molded and painted with precision. We can see the screws that attach the chassis to the body: two in the front, four in the middle and two in the back. Evidently, the four big holes in the middle are the mountings for the stand in the box. Another valuable detail is the fact that this car is an official license product of the then Chrysler Corporation, Universal Studios and the Blues Brothers’ movie merchandising department.

Although it looks very upscale to have a black & brown steering wheel and a black steering column in contrast to the rest of the dashboard, the actual car had a complete brown interior. As mentioned in the beginning, the handle of the search light mounted on the left side A-pillar is missing – only the insert place is visible from the inside. The seatbelts, however, are missing. Not that the Blues Brothers would ever have used them. Because remember their slogan: they were on a “Mission from God”.

If we look up, we can see the interior rear view mirror and the sunshades, but there is no headline. But it would have to be the absolute deluxe version for it to be in. Seats are correct as well; one seat bench including the head-rests in the front and one in the back.

The door trims match the one of the real size car: All beige with the chrome window handle. I like the fact that the windows are rolled down in the front – probably because the Blues Brothers always reach out their arms to indicate a turn, rather than switching on the turn signal.First of all, the quality of the steering wheel, instruments and dashboard is very good. Everything from the indicator and gear lever, to the gages and the police radio in the lower center is there. They integrated the accelerator and brake pedals, as well as the parking brake on the far left.

The packaging box comes a white brick imitation with of course, the Blues Brothers in the front and a detailed description in English and French in the back. In addition to the standard stand on which the car in mounted with four screws, there is an additional transparent container to put the loudspeaker & frame in.

Back on the road

Overall, this metal model car of the 1974 Dodge Monaco Sedan “Bluesmobile” is a very detailed example. It’s a real pleasure to see, touch and feel with how much respect RC2 made this car. Obviously, one can always to an even better job, but this one already is top notch.